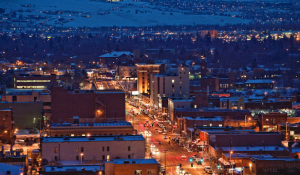 After the show, Mike and I found a way onto a rooftop in downtown Missoula. We were always doing things like that, looking for adventure. Ever since high school we’d climb up drainpipes and fire escapes, break into abandoned houses, and try to somehow get into the basements or attics of public buildings. It was kind of a compulsion.

That night we found a series of fire escapes, then a leap to catch the snow-slippery roof ledge. A few moments of feet dangling in the darkness of a four-story drop, then up and over onto the flat rubber roof. We were still amped up from playing a great show. The bar somewhere beneath us had closed after our final set, and the streets were full of drunk college kids in packs or newly-formed pairs, heading home or on to all night diners. Mike and I crept to the edge of the roof by the main street and began tossing snowballs at the late-night revelers. We laughed out loud as people scattered and cursed. We were above everything, invincible, rulers of all we could survey, which was a lot. The city lights spread out below us to the distant edges of town, where the three quarter moon illuminated the sparsely forested mountains rising all around. Far off you could make out the glow of taller peaks, and the stars above went on and on. The music still pulsed through my brain, my fingers repeating patterns struck on piano keys.

Mike and I had moved out west a few years back, not long after I finished college and he was out of the army. We’d formed a band and tried to make it on the local scene. We recorded an album, and thought that we were pretty good. We’d even developed a following in Bozeman, where we lived, and gigged there most weekends.

But tonight was different. It was probably our best show ever– all the band members were in sync, the music felt borderline transcendent, and the audience ate it up. On that freezing cold roof we felt warm and alive in a way that I’ve rarely felt before or since.

In the morning we’d pull ourselves off friends’ couches and floors, grab a cup of coffee, and drive the 3 hours back to Bozeman– 80 miles an hour down the long, empty highway. Over the next few months we’d play some more gigs, but then slowly, inevitably drift apart to New York, Wisconsin, California, Afghanistan.

Mike reenlisted– I guess he’s still seeking adventure. I hear from him from time to time, and worry– we’re not so invincible these days. The rest of us settled into happy lives full of school plays, mortgage payments and riding lawnmowers; but mostly devoid of snowball fights, or dangling from ledges in the night, or playing transcendent music in smoky Montana bars. Without thinking, I sometimes find my fingers still tapping out those same old melodies and chords.