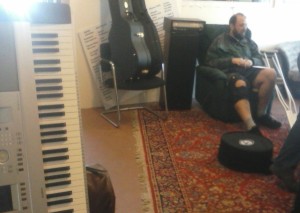 Just over a week ago, on a sunny afternoon, I was skiing with a friend, about to make the last descent of the day. We’d already had a great afternoon bombing down the mountain, chasing that feeling of exhilaration and grace that comes from a special combination of speed, frictionless motion, and the raw beauty of snow, trees, mountains and sky. I wasn’t tired, sore, or distracted. Yet…

From the chairlift we skated over to the top of a trail I’d been on many times before, one of my favorites– it’s narrow and winds back and forth through the trees, and takes you all the way to the base lodge. I wasn’t quite ready, but without looking or thinking I crested the lip of the trail and started down a steep, mogul-strewn drop that ordinarily takes just a few seconds to ski through before leveling off a bit.

This time it took me longer. Unprepared for the icy moguls, my ski caught and I fell forward, hard. Falling is part of skiing– it shows us the limits of our equipment, the terrain, and our ability, and I usually do it at least once every time out. This fall was different. While my body plummeted forward, my leg, stuck in the ski and rigid boot, stayed in its natural position. My ski popped off, and my freed leg swung around to join the rest of me; but in doing so, everything changed. Almost in slow motion my knee pivoted forward, and I felt something inside it twist and tear just a little too far. I slid a bit further and came to a stop halfway down the steep pitch. I pictured jumping up and walking uphill to grab my ski, and, with a bit more caution, finishing the run. If it were a warm, spring day, we might have wrapped up the afternoon with a beer on a sunny deck. But I knew instinctively that I could not go get my ski, that I likely could not walk at all. As adrenaline and endorphins rushed to my leg, making it feel happy and warm, I realized that something was seriously wrong.

As humans, we seem to be captivated by action, by violence. Perhaps this is a survival instinct of sorts– it is, after all, an active and violent world at times, and we revere those strong, steadfast individuals and institutions that protect us by relentlessly crushing our enemies. This fascination can be seen in many elements of culture, from actual war, to sports, to the movies, TV shows, books, and plays that inform our sense of social identity. I love football because of the athleticism, the adrenaline rush from a well-executed play, the high stakes drama of winning or losing, and above all the chess-like strategizing behind each move and countermove. But another draw that helps make it the most popular sport in America is the hits– the collisions, tackles and sacks that bring a guilty thrill of pleasure, an appreciation of one huge athlete laying out another with power and skill.

In fiction, violence is often noble and heroic. Despite his town abandoning him, in High Noon Gary Cooper stays to fight the outlaws, and we love him for his steadfastness and sacrifice. These days, we apparently can’t get enough of super heroes who single-handedly save our city, world, or universe by beating the shit out of the bad guys. Other times, violence is inconsequential, beautiful, and comic, as in Looney Tunes, or as in Quentin Tarantino and the generation of filmmakers he inspired. Yet the story violence that is most true to life occurs in tragedy, because it has real consequences beyond saving the day or titillating the audience. Macbeth and his wife kill their king out of base ambition; Agamemnon sacrifices his daughter to get a favorable breeze; Stringer Bell betrays Avon Barksdale by having D’Angelo killed; and in turn each of these tragic heroes must pay the ultimate price for their actions.

These stories tell the truth– that violence always has far-reaching consequences. The football player who takes hit after hit may end up with dementia in his 40s; he may die of an overdose, or by suicide, because he simply can’t live with the pain. Endless war in Africa or the Middle East is self-perpetuating, and its roots can go back dozens, hundreds, or thousands of years. Even the smallest event has long lasting effects: falling on a ski slope and tearing your ACL can be portrayed as a vivid instance of drama, but the real story is the week of lying in bed, the hobbling around on crutches, the premature end of the ski season, the necessary surgery and six month recovery. Or perhaps it’s about being thankful that nothing worse occurred, or the relief of finally having healthcare after 15 years without it; or the simultaneous worry over the high deductible, having chosen the cheapest plan based on the belief that getting ill or injured is unlikely. Whatever this story is about, I guess sometimes we need a reminder– as writers, as consumers of culture, as actors in society– that the shiny, transfixing moment of action is indeed only one moment, yet its repercussions will linger long after most people have forgotten it.