You may have heard that Major League Baseball is implementing new rules to speed up the pace of games. So far, these include common sense ideas like making sure between-inning commercials don’t run long, and preventing the batter from getting out of the box between every pitch to adjust his gloves (except for a hundred or so exceptions– after a swing, when timeout is called, after a bunt attempt, and so on). There is talk of more stringent rules to follow– a clock that counts down the time allowed for the pitcher to throw, limiting catcher/coach visits to the mound, automatic intentional walks, and even having pinch runners for catchers, the tortoises of baseball. The idea behind all these changes is that baseball games are too long (just over 3 hours on average); this is bad because young people supposedly don’t have the attention span to last that long before they disappear into the interwebs, or whatever it is that the youth do these days. I wonder, though, if the complaint is as much for older generations, who lament the fact that things are different now from the way they used to be.

I’m not sure if I’ve actually heard anyone say “Back in my day…” when talking about the length of baseball games, but that sentiment shines through in columns by and conversations with fans of a certain age. In the early 80s, the average length of a game was about 2 and a half hours, and the people who complain the most and loudest about how many pitches are fouled off, or how many times the catcher runs out to yell at his pitcher, are those who came of age in that era or earlier. This is what I think of as the conservative instinct, which is hardwired into all of us ever since we were kicked out of Eden, or since Pandora opened her box: life in the past usually trumps the sorry state of the fallen present. Yet we have to remember that a lot of times things are simply different, and sometimes better, than in the past, and they will be different again (and hopefully better) every single day and year and century to follow.

It’s easy to find cases of progress over time, rather than regression. Go back to 1959, when my Boston Red Sox were the last team to integrate, 12 years after Jackie Robinson became a Dodger. As many have written, was the 86-year World Series drought really the Curse of the Bambino, or was it caused by the scourge of Yawkey (and institutional) racism that persisted at least into the 90s http://www.bostonglobe.com/sports/2014/09/20/tommy-harper-still-haunted-time-with-red-sox/Tw0RLaFinaqTqkt8jLsYeP/story.html? Although racism, sexism, and homophobia continue to be huge negative influences on sports and society, who wouldn’t say that things are much, much better now than they used to be?

Which brings us back to the length of baseball games, quite a trivial matter in comparison. But the facile point, that traditional doesn’t necessarily mean better, might apply in this case as well: why can’t longer games be considered an improvement? Personally, I love baseball. I love the slow build, the drama, the strategy (and meaningless ritual) that goes into every at bat, every throw to first, every foul ball, every taken pitch, every practice swing and batting glove adjustment (I wish Clay Buchholz would throw his pitches a bit quicker, but what are you going to do). I love the fact that it’s so slow you don’t always have to pay attention; I can keep one eye (or ear– I usually listen on the radio) on the game while cooking, reading, gardening– even working. I love the goofy interplay between Joe and Dave or Don and Remy. I love how the crawling pace and even dullness of baseball sets up intense moments of overwhelming excitement– Ellsbury stealing home, Pedey making an amazing, run-saving catch, Papi hitting a grand slam to tie the game late, with Torii Hunter tumbling into the bullpen. It’s a contrast so dynamic that I believe it exceeds the action sequences of any other sport. So why would I want there to be less of it?

People complain especially about the length of Red Sox/Yankee games, which can stretch to 4 hours with all the patient hitters taking pitches and hitting foul balls. For me these are the most exciting games of the year– the Rivalry™ that is overly hyped, and which has grown a bit stale in recent seasons, still has the power to make for thrilling entertainment; and until recently, the battles were long and epic because both teams were so good, and evenly matched. In my memory, the Sox’s games last year seemed to include a lot of hasty, under 3 hour affairs; and the team–especially the free swinging offense– was dreadful, flirting with and finally settling comfortably into last place. The good Red Sox teams of the 21st century have succeeded specifically because they walked, fouled, and drove up pitch counts; and they never would have won the last two World Series without “painfully” slow pitchers like Jon Lester and Josh Beckett. At least on the hitting side, the longer games are due in large part to awareness of the value of on base percentage, and of patient, disciplined at bats.

But again, what about the youth? While MLB viewership is going up, the average age of baseball fans is also steadily increasing, and according to the Wall Street Journal, kids ages 6-17 make up just 4.3% of audiences. In my unscientific analysis of my freshman writing students, the majority don’t watch any professional sports at all (as I didn’t in high school or college– I had much more important things on my mind in those days, like figuring out what life was all about.) Among the sports fans, more do seem to like baseball the best, but that could be geographic or simply idiosyncratic. I wonder, though, will shortening baseball games– which still take less time than the average (insanely popular) football game– make any difference in attracting younger fans?

Baseball is a game of potential and possibility, the only game that specifically and intentionally has no time limit. It’s perfect for people who are patient, determined, and romantic. Some people need the constant action of the back and forth on the court, rink, or pitch; many more just don’t get why anyone cares about the outcome of a meaningless game athletes make way too much money to play; and some few of all ages find beauty, value, and wonder in the repetitive, mostly boring battle between a guy throwing a ball and another one hitting that ball with a wooden stick at some other guys (or better yet, where those other guys ain’t). There’s around a 65% chance or higher that my favorite hitter will make an out; but what if this is one of those rare times when he gets on base? What if he hits a home run to win the game? Those 3 blessed hours of hoping and dreaming and washing dishes and surfing the interweb will have paid off, and I wouldn’t want it to go by any quicker. 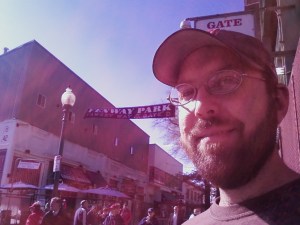 One thought on “At 2 hours or 3 hours, baseball is a slow, dull, glorious game.”